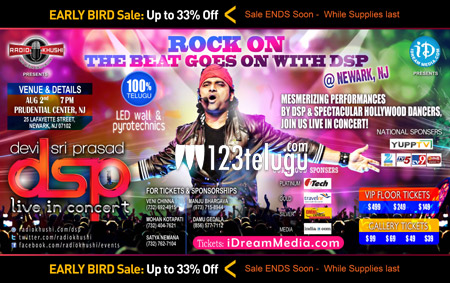 Edison, NJ – 24th July 2014: All you Music lovers of East coast & USA, get ready for DSP ‘s spectacular tour finale on the 2nd of August, at the sprawling Prudential Center, New Jersey.

As is known, DSP (Devi Sri Prasad) the Número Uno Music Director and composer from South India is currently a 6 City Tour in the USA. For the first time ever, DSP had unveiled a Unique Promo of his US Tour on 14th June 2014, in the presence of Power Star Pavan Kalyan and Ace Director Trivikram Srinivas.

DSP ‘s maiden concert at Atlanta on the 6th July , set the tone for his exciting musical sojourn to unfold. His subsequent shows at San Jose & Dallas have sent the audiences into a musical frenzy.

DSP is unlike any other Music Composer from South India. He is as electrifying on stage as his tunes are rocking in his films. DSP originally began his career as a Pop Artist with his stupendously successful maiden musical album titled ‘Devi’. This year,DSP completes 15 melodious years in the Movie Industry.

With LED screens, state of the art lighting, a mix of extremely talented and dream like American & Indian Dancers, Musicians, and the grand setting of Prudential Center,the DSP concert would rival the best of International concerts. Adding to this DSP is allowing chosen Music , Dance lovers from various cities of US, to shake a leg with him, during the concerts. And topping it all, the icing on the cake would be the fact that 2nd August happens to be the Birthday of the Musical Wizard.

On this occasion, several top stars from across the four southern states , Power Star Pawan Kalyan, Super Star Mahesh Babu, Young Tiger NTR, Stylish Star Allu Arjun, Rebel Star Prabhas ,Ilayathalapathy Vijay, Super Star Suriya, Dr.Kamal Hassan congratulated DSP on his spectacular journey and reminisced their association with DSP in various films. They have expressed their excitement about DSP ‘s US Tour 2014, and the Grand finale on August 2nd, coinciding with his birthday. These special videos by the Galaxy of Super Stars are available on DSP’s own YouTube Channel ‘YouTube.com/ThisIsDSPMusic’.

So, Set your date , for a life time session of high energy , non – Stop Musical revelry & Celebrations , on 2nd August.

All other Tour Videos can be found at https://www.YouTube.com/ThisIsDSPMusic

iDream Media currently owns library of over 1000 Telugu movies that are offered for free viewing on YouTube and have plans to augment the library to 2000 movies by the end of the year, besides foraying into alternative and non-traditional digital content, that will have high engagement quotient.