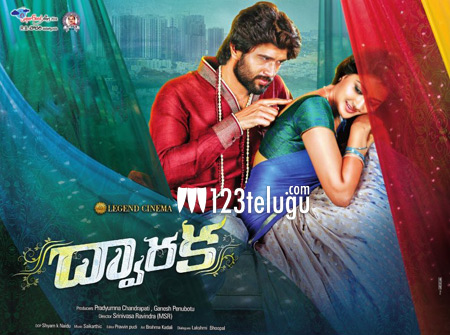 Young hero Vijay Devarakonda who has shaken the USA box office recently by collecting One million dollars with his “Pellichoopulu” is ready to repeat the history with “Dwaraka” which is slated for worldwide grand release on March 3rd. Yukta Creations LLC., who acquired screening right of Dwaraka in USA has confirmed all the Premier shows on March 2nd. All the prints have been dispatched to the respective locations four days in advance. The content & KDM’s are delivered to respective theaters in day before and its Premiers shows are confirmed.

The pre-release buzz about the film is extremely positive and the film is said to be come out quite well. Be it romance, comedy, action or songs Dwaraka is expected to be a one of the mile stone in Vijay Devarakonda’s career. Industry talk is that Vijay’s has huge scope for performance in this film and he extremely performed well, where in his recent interview he said in “Dwaraka” audience can see his best performance.

One of the most interesting aspects in the film is Vijay Devarakonda and Pooja Jhaveri on screen chemistry, pre-release poster creating huge murmur about Devarakonda and Pooja Jhaveri on screen romance. Another interesting aspect of the film is going to be Vijay will be shown in dual shades as Erra Srinu & Krishna Nanda Swamy!!!!
The film is directed by debut director Srinivas Ravindra, Dwaraka has music by Sai Karthik. Pradyumna Chandrapati and Ganesh Penubothu lavishly produced the film on Super Good Movies. The movie managed to create good buzz in the audience with the promotional material released so far. T-Mobile has come up with good offer for this film as T-Mobile users can buy Dwaraka premiers and weekend show tickets only for $4!!!.

Come let’s enjoy this romantic entertainer in theaters to see how Vijay Devarakonda transformed himself to entertain us as Erra Srinu & Krishna Nanda Swamy!!!!