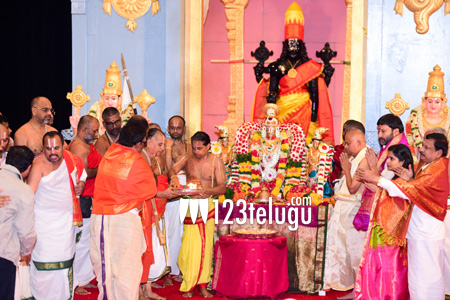 It was a day when the Gods descended in the west to witness the Vaibhavotsavam of Lord Venkateswara. Used to seeing the rituals at Tirumala, it was a change for them! The venue was Dallas metroplex. A modest 8,000 devotees thronged at the venue Frisco Convention Center in Frisco. The divine serenity, and the blissful smile of the Lord opened the doors at 6.00 AM as part of the two day event.

A unique and once-in-a-lifetime experience was in the offing as there was not one, not two but over 15 kainkaryams happening. Suprabhata Seva, Thomala Seva, Sahasra Kalasaabhishekam, Vasanthotsavam, Sahasra Deepalankarana Seva, Ekanta Seva, Abhishekam and His Holy Kalyanam. Seldom get devotees a chance to witness such events back-to-back at Tirumala. But the Lord who is always a giver didn’t let this opportunity go amiss for the welfare of the devotees. The volunteers had worked round the clock for over 4 months by then, and it was the penultimate weekend. The divine infused an unknown power to keep the proceedings moving seamlessly. The Suprabhata Seva started at 7.00 AM with the Tirumala Tirupathi Devasthanams (TTD) Board members A.V. Ramana, Bhanu Prakash Reddy, TTD Vaibhavotsavam project director Mukteswara Rao, Deputy EO Bhaskar Reddy and Raghunath flagging the event. A team of over 25 archakas hymned the Suprabhatam invoking the Lord. The curtains were open and the devotees witnessed an eternal bliss at the sight of the Goddesses and the God.

Later Thomala Seva, Sahasra Kalasaabhishekam, Vasanthotsavam were performed for the deities and the holy Tulasi water was sprinkled to the visiting devotees. But the notable among the ones was the Abhishekam to the Lord. The devotees felt a spiritual trance when the Lord was receiving the Abhishekam. The Archakas later began the Kalyana Mahotsavam and the whole center was reverberating with chanting of Govinda Nama, Annamayya Keertanas and the musical entourage from TTD. The devotees engrossed themselves in the chanting and a divine fervor was prevalent among the attendees. Couples sponsoring Kalyanam were performing with utmost devotion. Elaborate arrangements by over 300 volunteers were made by the organizers such as seating, food, registration, Kalyanam donors, hospitality, Darshanam, decoration e.t.c., speaking at the occasion TTD Board Member Bhanu Prakash Reddy thanked the devotees and felt happy for organizing Kalyanam in Dallas. He exclaimed the Lord is bound to usher the blessings for partaking in the event. His Holiness Ahobila Chinna Jeeyar Swami attended the event and blessed the crowd with a brief spiritual discourse.

The committee thanks Frisco Convention Center for the venue, Amaravathi Cuisine, ByteGraph, media partners covering the event and all the devotees for attending the divine nuptial.