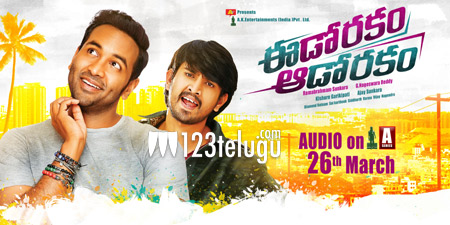 Vishnu Manchu and Raj Tarun joined forces for a movie titled ‘Eedo Rakam Aado Rakam’. Directed by G.Nageswara Reddy, this film is being produced by Ramabrahmam Sunkara under A.K.Entertainments India Pvt.Ltd banner and ATV is presenting it.

The title and first look of the film, released recently, have received very good response and now the team is gearing up for the audio launch. The audio of the film, composed by Sai Kartheek, will be launched this Saturday (26th March). The event is going to be a grand affair with who’s who in the industry attending it.

Vishnu is romancing Sonarika of ‘Jadoogadu’ fame and Hebah Patel will be seen opposite Raj Tarun and the audio will be released through A series.