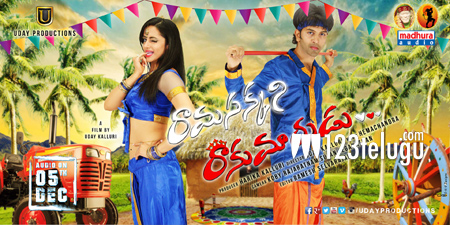 Uday Productions, a Canadian-based film production company has launched their maiden production Ramasakkani Rakumarudu. Tipped to be a romantic comedy entertainer, the film marks the debut of Uday and Sapna in lead roles. Directed by newcomer Uday Kalluri, Ramasakkani Rakumarudu is the first Canadian Telugu film set in the backdrop of Canada. Renowned singer Hema Chandra is scoring the music for this film and the songs will be launched through Madhura audio on December 5th at Toronto, Canada.

The film boasts of commercial values on par with Telugu Film Industry standards. The first look posters and teaser of the film released recently have garnered wonderful response from the movie-buffs.

Briefing about the film director Uday Kalluri said,” A message oriented multicultural film portraying social and cultural differences affecting relationships amongst immigrant parents and their children. The film is a fun filled family entertainer encapsulated with romance, comedy, drama and also conveys a great message to the NRI audience. The film has a run time of about 150 minutes and the album has three songs.”

The shooting of the film has been wrapped up and the post production formalities are in full swing. Producer Harika Kalluri is planning to release the film worldwide in January, 2016 on the occasion of Sankranti.

Koby Rajaratnam and Sujan Jeganathan cranked the lens, while editing is handled by Ramesh Selvarajah.