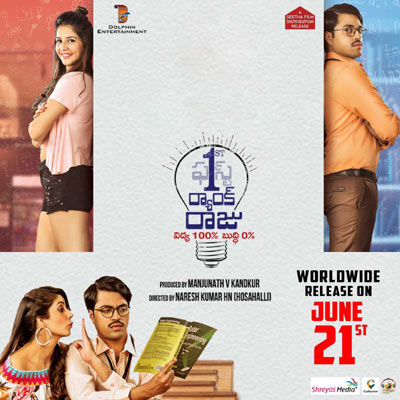 Vidya 100%, Buddhi 0% — this tagline sums up our hero ‘First Rank Raju’. A total nerd, who’s a math and science whiz, he is full of bookish knowledge but has zero common sense. How he struggles to cope everywhere else except in the classroom makes for a relatable story, “The concept of the film is completely relevant to today’s times and easily relatable. So many students commit suicide due to poor marks, this film show them that getting good marks isn’t everything in life. Chetan Maddineni plays the protagonist, Raju, who ends up making a fool of him because he simply doesn’t know how to conduct himself in a world that’s beyond his books. “There’s a misconception that children who don’t get good marks grow up into useless adults. But Raju, who’s always been a class topper, can’t really succeed at anything in life. He’s a good student, but a terrible friend, lousy lover, inefficient employee and definitely a bad citizen of the country.

He soon realizes good marks aren’t, and shouldn’t, be the ultimate goal. A remake of the 2015 Kannada super hit First Rank Raju, the film will strike a chord with the Telugu audiences too and it will be an out-and-out entertainer. Naresh the Director who also directed the original version in Kannada directs this version too With actors like Kaashish Vohra, Prakash Raj, Priyadarshi, Brahmanandam, Vennela Kishore, Rao Ramesh, Naresh and Posani Krishna Murali, it will definitely be a fun ride,” says Naresh.