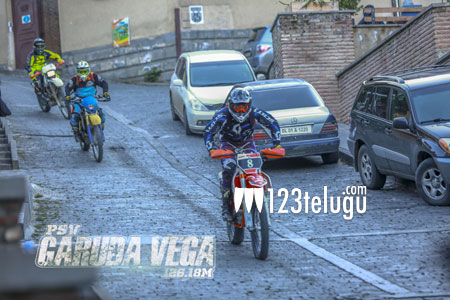 Georgia is a little known country tucked between the Black sea in the West and Caspian sea in the East. The country forever was at war with the USSR and present Russia as recently as 8 years ago. This pro-U.S country is slowly emerging in to a great destination for film makers across the globe winning the “Best film making destination in the world” last year. The country has abundance of talent at affordable rates which the team of Garuda Vega has taken full advantage of. In the process of making top-notch action sequences, Praveen Sattaru hired Georgia’s top stunt biker Giorgi Odzelashvili for the chase sequence in Garuda Vega. Lado Gudadze and Giorgi Abashidze are the other two bikers riding along side Odzelashvili. He was awarded the No.1 Dare Devil of Georgia in the year 2015. This chase involves biking through the busiest streets of Tbilisi with hundreds of cars and thousands of people involved and only the best riders can handle it well, says the director.

Sunny Leone comes as a special attraction with a massy dance number. Shraddha Das is playing a journalist. Adith of “Katha” and “Tungabadra” fame is playing a character on par with Rajashekhar. Pooja Kumar of Viswaroopam fame is playing the wife of Rajashekhar. Kabali fame Kishore is the main villain. while Nasser, Ravi Varma and Charan deep wear NIA suits, Adarsh, Shatru and Ravi Raj are trained assassins. Avasarala Srinivas will be seen in a very funny avatar. Ali dons a psychologist role and 30 years industry Prudvi as a nymphomaniac. Shayeji Shinde and Posani are rival politicians.