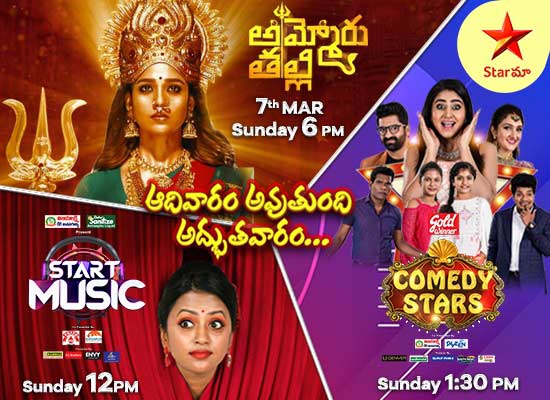 Nayanatara literally appears as a Goddess on Star Maa in her latest flick that is due to premiere this Sunday. Offering a great deal of humor, Nayanatara’s starrer fantasy comedy “Ammoru Thalli” is one of the best movies that had digital releases recently.

Directed by RJ Balaji and N J Saravanan, “Ammoru Thalli” brought out the best of Nayanatara. Her portrayal of a Goddess along with the protagonist Balaji in the film had been at the receiving end of many praises. Revolving around the life of a News Anchor who tries to expose a fake Godman along with a Goddess, the film is described as one of the best entertainers by the critics.

Star Maa is now bringing this movie to your living rooms for the first time along with the many great shows on Sunday.

Stay Tuned to watch the World Television Premiere of “Ammoru Thalli” on Star Maa at 6 PM IST this Sunday.

Let the fun of Sundays begin with the much-loved Musical entertainer “Start Music” at 12 PM and “Comedy Stars” at 1:30 and end it with a bang.