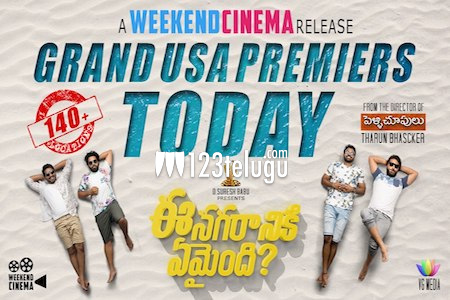 After the filmmaker won everyone’s hearts with his debut film Pelli Choopulu, he kept everything low key before beginning work on his second film that is hitting the theatres, starting from today.

With grand premieres for the film across the US, the overseas distributors Weekend Cinemas have made elaborate preparations to enthrall the audiences at various locations across the US as the films is set for a worldwide release across the country in 142 centers, a grand opening for a small film like this.

The music by Vivek Sagar has already been creating waves, generating a great deal of attention for the film.

Another interesting factor in the film would be the young and promising cast that will add an edge to Tharun Bhascker’s novel style of filmmaking.

Get set to watch a fun buddy comedy that you can enjoy equally with friends and family at the premieres today, the 28th of June at cinemas close to you in the States.

Watch this space for more updates.