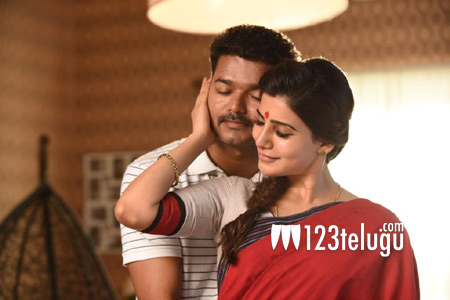 The Telugu version of Vijay’s ‘Theri’ is going to release as ‘Policeodu’. The movie is getting ready for a grand release this week in the Telugu states. The film has been given a U certificate by the board. Producer Dil Raju, heroine Samantha and director Atlee spoke to the media, at a special event conducted at Taj Deccan.

“I don’t release dubbed films in Telugu unless there is something special in them, like Mani Ratnam’s OK Bangaram. When I saw some scenes from Theri in Chennai and heard the story, I was impressed. I wanted to bring this story to Telugu people. I have always liked Atlee and I was impressed with the way in which he handled ‘Raja Rani’. I am sure Policeodu will do well here”,said Dil Raju.

“I usually get a little nervous before any release of mine. But with Theri and Policeoud, I am relaxed. I have no tension as I know what a fabulous job Atlee did. I am sure the film will impress everyone here”, said Samantha.

“I got a lot of offers to direct a film in Telugu after Raja Rani. But I wanted to do a big Tamil film before taking it up. I want to direct a big budget Telugu movie soon. Policeodu is an emotional thriller that shows why it is important to bring up children in a good way. It will appeal to all sections of the audience”, said director Atlee.

Sri Venkateswara Creations and Kalaipuli S Thanu will be releasing the Telugu version of the film. Vijay, Samantha, Amy Jackson, Prabhu, Radhika, Mahendran and other senior actors are playing important roles in this movie. Policeodu will hit the screens later this week.