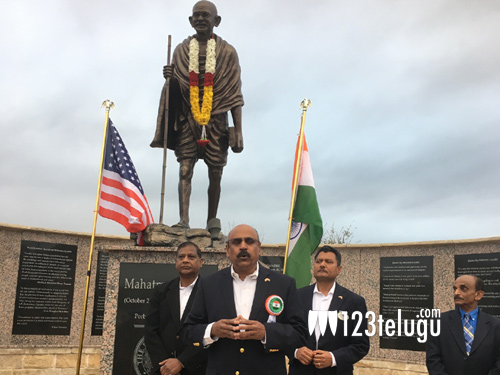 Dr. Prasad Thotakura, Chairman, MGMNT, hoisted the India flag in the midst of jubilant cheering crowd who recited both Indian and US National Anthems. He cited the importance of the Republic Day being the day of the Constitution of India came into effect 68 years ago on January 26, 1950.

Dr. Thotakura in his keynote address stated that “every religion has its own holy book like Bhagvad Gita, Bible, Quran etc., but as a whole all Indian citizens have one holy book called the “Constitution of India”. It defines the principles, policies, procedures, powers, duties, responsibilities and fundamental rights of all Indian citizens. The constitution is supreme law of the land; every citizen must review, understand, follow and uphold the values of the constitution. This is the day to remember the hard work of Father of the Constitution Dr. B.R. Ambedkar and stalwarts like Jawaharlal Nehru, Dr. Babu Rajendra Prasad, Sardar Vallabbhai Patel, Moulana Abdul kalam Azad, Shyam Prasad Mukherjee etc., who played a pivotal role and worked very hard for about 3 years to bring out the best constitution for the country. Dr. Thotakura restated that as responsible Indian decent it is our responsibility to rededicate ourselves in service of the motherland, India”.

Mr. Kamal Kaushal, MGMNT Board of Director, conveyed his Republic Day greetings to the community and remembered the sacrifices of Mahatma Gandhi who got independence to India with only peace methods.

Mrs. Shabnam Modgil, MGMNT Board of Director, in her closing remarks recollected the dazzling Republic Day Celebrations that were held in India this year where heads of 10 Southeast Asian Nations graced the occasion. With the same spirit people gathered at the Gandhi memorial to celebrate India’s 69th Republic Day. She invited everyone to gather again on January 30that the same place to observe the death anniversary of Mahatma Gandhi. She thanked all volunteers and community members who helped to make the event successful.