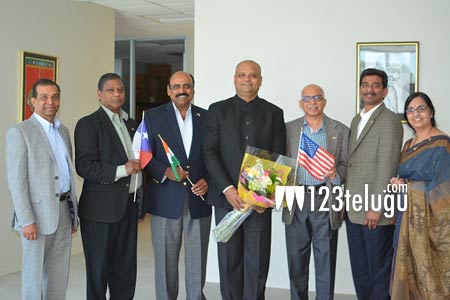 Indian American Friendship Council (IAFC) leaders met with Hon. CGI Dr. Anupam Ray, the Consul General of India, Houstonon May 13thFriday and welcomed him as new CGI who took charge a couple of weeks ago.
Dr. Prasad Thotakura, IAFC President, briefed CGI Dr. Ray about the vibrant Indian American community and their contributions towards the growth of the local economy, commitment to invest and donate their resources for the development of motherland, India. IAFC, formed in 1990, promotes and provides a common platform to exchange views with local, national and international level policy makers. Its mission is to improve US-India relations, support developing countries, promote global democracy, protect the interests of the Indian American community and educate members of US Congress and Senate. IAFC a non-partisan, non-political, non-profit organization supports and encourages all Indian Americans who run for political offices at all levels irrespective of their political party affiliations.
Dr. Prasad Thotakura, who also serves as the Chairman of the Mahatma Gandhi Memorial of North Texas (MGMNT), an amalgamation of the Indian American Friendship Council (IAFC) and the India Association of North Texas (IANT) gave a presentation on Mahatma Gandhi Memorial Plaza that was built with the support and contributions of the Dallas / Fort Worth community. Now, it stands as the largest Gandhi memorial in the USA.
IAFC President Dr. Prasad Thotakura, Executive Vice President, Mr. Taiyab Kundawala. Vice President, Mr. Rao Kalvala, Board of Directors – Mr. Murali Vennam, Mr. Ramki Chebrolu and Mrs. Ranna Jani welcomed CGI Dr. Ray and invited him to visit Dallas and Mahatma Gandhi Memorial at his earliest convenience. Dr. Anupam Ray appreciated the effort of the MGMNT leadership in building such a memorable Gandhi memorial and accepted the invitation.
IAFC leaders commended Dr. Ray’s vision and commitment in providing seamless consular services to the Indian American community through his office.
Dr. Anupam Ray is a physician by education and was a Neuro-surgery resident before he joined the Indian Foreign Service in 1994. He has held key diplomatic assignments as Political Officer in Bangladesh, Sri Lanka Desk Officer, as manager of India’s successful campaign for the position of Commonwealth Secretary-General out of London, and as a senior member of the Indian team in the UN Security Council in New York. He was the first employee of India’s outgoing aid agency (Development Partnership Administration) created in 2012. In addition to a medical degree, he has a M.A. in Public Administration and speaks English, German and Hindi.