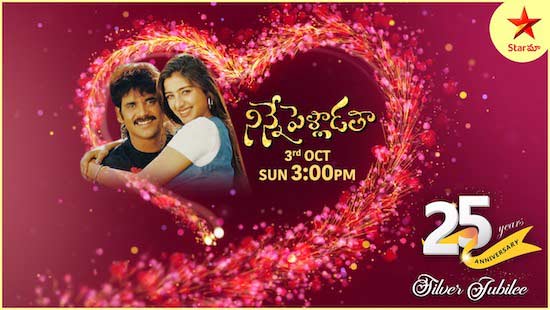 A telugu film that remains special for everyone across the world is “Ninne Pelladatha”, starring the Greeku Veerudu Nagarjuna and the scintillating Tabu. It’s been 25 years since people walked into the theatres expecting to watch Nagarjuna-Tabu’s magic on the silver screen and walked out in a happy daze watching what was delivered.

The film was a massive hit which went on to become a cult classic. Ninne Pelladatha completes its 25 years today, and on the occasion, Star Maa celebrates the Silver Jubilee of the Film King Style, adding a little delight to the Telugu viewers.

The Akkineni scion’s evergreen hit was a family entertainer that holds a special place in the history of Telugu Cinema even today. The epic love story of Pandu and Seenu is also a musical treat that takes us back to the blissful times.

Watch the movie and relive the nostalgia while “Yeto Vellipoindi Manasu” literally transports you to an entirely different world full of love, and lots of laughs. A world craftily created by the director extraordinaire, Krishna Vamsi. The song “Kannullo nee roopame” by the legendary S. P. Balasubrahmanyam and K. S. Chithra is one of the greatest songs of all time.

Join Star Maa in the celebration of 25 glorious years of an emotional saga, and an extraordinary journey of love.

Watch it this Sunday at 3 PM on Star Maa with none other than the Star duo sharing their sweet anecdotes.

CLICK HERE!! for the Promo Video of Ninne Pelladatha.