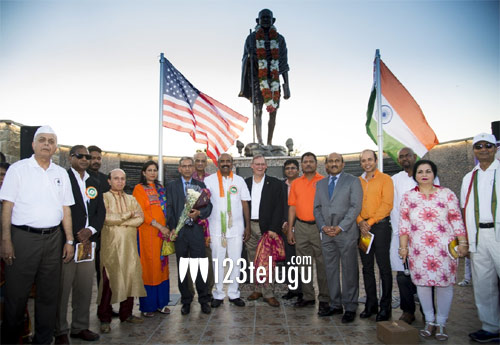 Rao Kalvala, MGMNT Secretary welcomed all and introduced Guests to the audience. In his opening remarks, Rao thanked the community and city of Irving officials for their great support in building this Mahatma Gandhi Memorial Plaza.

Over the past 70 years, there is a lot of progress in India, now India is one of the fastest growing economies in the world. Despite this advancement, all Indians across the globe should unite to fight against social evils like Terrorism, Corruption, Domestic violence, Female infanticide, Illiteracy, Sanitation etc., for better India.

“We all need to realize that hatred, bigotry, outrage, racism will create an enormous gap among the mankind. Only patience, alliance, tolerance and coherence will bring all people together”. Dr. Prasad Thotakura, Chairman, MGMNT said.

Vice-Consul Ashok Kumar on behalf of Consulate General of India, Houston and Dr. Anupam Ray congratulated the gathering for celebrating India’s Independence Day with huge enthusiasm. He said that it is very fortunate to participate in this event and India contributes to be in the right path in the right direction towards the development of the nation.

Irving City Mayor Rick Stopfer expressed that it is very proud and delighted to have many Indian Americans live in the Irving City and appreciated all their great contributions for the betterment of the city. Irving City always welcomes many immigrants and city officials are always there to help and build a strong relationship with the Indian American community. Mayor Rick Stopfer appreciated Dr. Prasad Thotakura and MGMNT Board of Directors for all their hard work and services and pleased to have Gandhiji Memorial in the center of the City. It is very joyful to see to see thousands of visitors across the globe visiting Mahatma Gandhi Memorial Plaza every month.

Former Director of Parks and Recreation, Irving City, Ray Cerda mentioned that he had pleasure to work with MGMNT Board members during the 4-year tenure in planning to build the Mahatma Gandhi Memorial Plaza. He also told that this Gandhi Memorial stood out as a memorable project

not only in the state of Texas but also in USA. Cerda appreciated the efforts of MGMNT Board for raising over $700,000 within short span of time to build this memorial.

Sunnyvale City Mayor Saji George appreciated Dr. Prasad Thotakura and MGMNT Board for organizing the Independence Day Celebrations event with a great patriotic fervor. He stated that 242 years back United States has declared its Independence. When compared to USA, India’s democracy is young. India became the largest and best democracy in the world. Mayor George reminded that India got its independence through nonviolence, civilian disobedience. We are all proud to celebrate India’s Independence Day in the land of USA.

Coppell City Council member Biju Mathew conveyed greetings from the city of Coppell officials and he is honored to be at the event. Biju Mathew thanked Dr. Prasad Thotakura, Rao Kalvala and all team members for their tireless efforts in building the largest Gandhi Memorial in the USA. He stated that being Indian Americans, we have seen vibrant democratic cultures melting into the main stream. He further stated that our home land India and adopted land USA are not different and both the nations have many things in common.

Kamal Kaushal, MGMNT Co-chair in his remarks stated that it was very joyful to see a huge crowd near Father of the Nation, Mahatma Gandhiji’s memorial to celebrate India’s Independence Day. He told that when India got its independence, it was an under-developed country but today India is a developed and the fastest growing economies in the world. India’s Economy is higher than any other country in the world where the growth rate is over 7%.