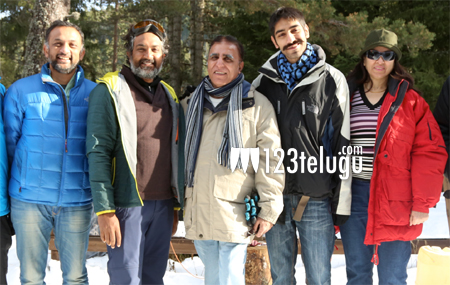 Team Baahubali had a surprise visitor a few days ago, while shooting for some action sequences in Bulgaria, in the form of His Excellency Mr. Rajesh Kumar Sachdeva, The Indian Ambassador to Bulgaria. The Ambassador visited the sets along with his family and was bowled over by what he saw. He spoke to the lead actors Prabhas and Tamannah Bhatia and also appreciated director S.S. Rajamouli, producer Shobu Yarlagadda and the rest of the team for mounting an Indian Film on such an epic scale.

The Ambassador was keen to know about the progress of ‘Baahubali’. He also enquired about the potential Bulgaria had, as a preferred overseas filming destination for Indian movie teams. The Ambassador’s visit was one of the high points of a successful Bulgarian outing for Team Baahubali.

Mr. Rajesh Kumar Sachdeva has arrived in Bulgaria in the first half of September 2014. He has been a member of the Indian Foreign Service for more than 30 years and has served as a diplomat in various capacities in Egypt, Yemen, The Netherlands, Sri Lanka, Sweden, Singapore. His last foreign assignment was as Ambassador of India to Cambodia (2008-2012). Mr. Rajesh Kumar Sachdeva was born in Lucknow, India on 13 March 1957. He has studied Bachelor of Technology from Banaras Hindu University, India. He is married to Promila and they have two sons.