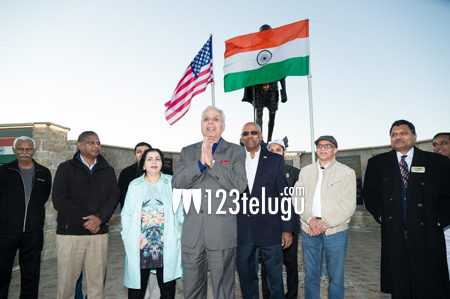 Dallas, TX: Many hundreds of Indian American community from all age groups, Mahatma Gandhi Memorial of North Texas (MGMNT) Board of Directors participated very actively in India’s 68th Republic Day celebrations held at Mahatma Gandhi Memorial Plaza located in the city of Irving, TX on January 26th.
Mr. Rao Kalvala, Secretary, MGMNTwelcomed the gathering and thanked city of Irving and donors who made this Gandhi Memorial possible in the heart of the Metroplex. He appreciated the support of the community for all MGMNT activities and invited to gather again on January 30th to pay tribute to Mahatma Gandhi on his 69th death anniversary.
Mr. John Hammond, MGMNT Board of Director garlanded the Gandhi Statue, Dr. Prasad Thotakura, Chairman, MGMNT, hoisted the tricolor flag in the midst of applauses and jubilant mood of the gathering.
“The Republic Day honors the date on which the Constitution of India came into force. Though, India obtained its independence through tireless efforts of our Father of the Nation Mahatma Gandhion August 15th , 1947 it took more than two and half years to have a permanent constitution. Constitution drafting committee chaired by Dr. B.R. Ambdekar came into effect on January 26th, 1950. Irrespective of age groups, rich or poor everyone must respect and follow the constitution of India. As Indian Americans, we are very fortunate to experience the democratic values of both oldest and largest democracies in the world”, Dr. Prasad Thotakura, Chairman, MGMNT said.