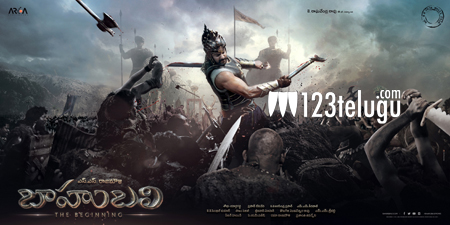 Over the past month, the “Baahubali” team released posters of the major characters in the film – so as to introduce the key players in the story. Finally today, the most awaited poster of Prabhas as ‘Baahubali’ was released. Elated fans from across the nation took to social media, voicing their approval of the poster and excitement for the upcoming trailer.
In reference to the character, Director S. S. Rajamouli tweeted:

Uncrowned, but enshrined in the Kingdom’s heart.

The audio and trailer launch is scheduled and confirmed for May 31st in Hyderabad.
“Baahubali” is a two-part period drama directed by S. S. Rajamouli and produced by Arka Mediaworks. The first part, titled “Baahubali – The Beginning”, is scheduled for nationwide release this July. The film’s cast boasts of the popular stars Prabhas, RanaDaggubati, Anushka and Tamannaah.