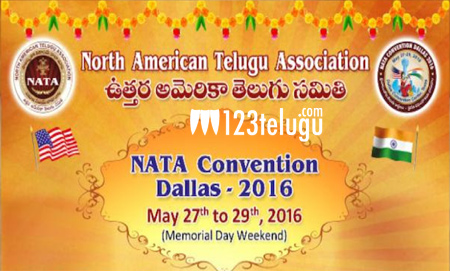 The North American Telugu Association (NATA) cordially invites you to participate in the NATA Convention Dallas 2016, which will be held at the Dallas Convention Center, Dallas, TX, from May 27th to 29th, 2016 (Memorial Day Weekend).

NATA (North American Telugu Association) is a leading non-profit organization serving the Telugu community of Indian origin living in the United States and Canada. NATA is involved in promoting community services, cultural and social activities, student assistance, and preservation and promotion of the Telugu language and heritage in the United States and across the globe. As part of the community service, getting together with all Telugu people to understand and discuss the growing needs of the community, to address the issues across education, immigration, health, business and services, NATA providing a platform to all the telugu people to come and participate in the convention event.

These Conventions will be attended by South Asian community mostly Telugu People from all over US, Canada, India and other Countries. Most of the attendees, besides socializing and enjoying cultural programs, they will spend time with various businesses that participate. This year we have an exciting programs planned and will have a business friendly floor plan. Several dignitaries, government officials from State of Andhra Pradesh, Telangana and USA are expected to attend this convention.

We expect this year’s Convention to be very successful with your participation. Preparations for this convention are fully going on with the intention of providing all the facilities for the expected attendance of over 12,000.

Attendees for this convention include various professionals such as physicians, engineers, businessmen, entrepreneurs, IT professionals, scientists, research scholars, students, technocrats, poets, cine artists and public from various walks of life. Moreover, separate youth programs shall be attended by the youth from all over the world. The Dallas Convention Center, a state of the art facility, one of the best convention centers in the world is conveniently located close to major highways, Airports and mass transit system.

NATA Convention team came with high quality programs with best entertainment for the attendees for this convention. These programs are designed such a way that all the people from elders to small kids will have very memorable time and treasure this.

NATA Dallas Convention activities are planned high quality programs with rich Telugu culture and heritage. Some of the important programs during the event are below:

• NATA IDOL ( Singers in USA, Winners will get a chance in movies to sing).

• MEET AND GREET OF CINE STARS and ARTISTS

• Presentation of Journey of Telugu Cinema by Prominent Movie Directors.

Some of the Prominent Guests:

• Telugu literary poets and scholars coming from India and USA.

Prominent musicians, singers, cine artists, poets, politicians and spirtitual leaders combining with local telugu community artists getting ready with all different activities to mesmarize the attendees and NATA takes this opportunity to invite all telugu people around the world to come with family and be part of the Dallas 2016 NATA convention and make it very big success.

We thank you and look forward to seeing you at the convention.