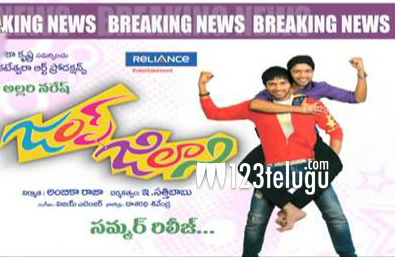 Jump Jilani’s recent trailers has generated a positive response and AllariNaresh said, “I am extremely confident that the film will be a big hit. We have made plenty of chances to suit the Telugu nativity and I can confidently say that the film has more comedy than what you would have seen in Sudigaadu.” The film is the remake of a superhit Tamil film Kalakalappu. E Sattibabu has directed the film and Ambica Krishna has produced in association with Reliance Big Entertainment.

“Jump Jilani” is scheduled to release worldwide on 12th June 2014 and CineGalaxy, Inc. will be overseeing the film’s release in USA.