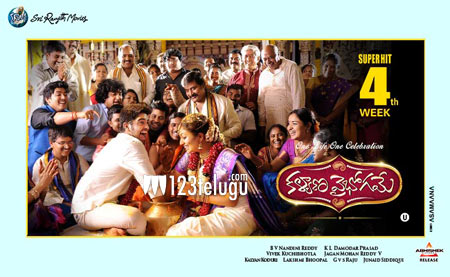 The film ‘ Kalyana Vaibhogame ‘ which is produced by K.L.Damodar Prasad under Sri Ranjith Movies and directed by B.V. Nandini Reddy has entered successfully into its 4th week run at the theatres. The makers are very happy at the huge success of the film, and the start of the summer holidays has given the film another massive boost at the box office.

A romantic family entertainer which deals with the present youth’s perspective on love and marriage, it has garnered tremendous response from the audience and the media as well. The film is also continuing its dream run in the USA having crossed $260K which is a record for a film of this size.

The makers have released a festive 4th week poster on this occassion. The film has Naga Shourya and Malavika Nair as the lead pair.