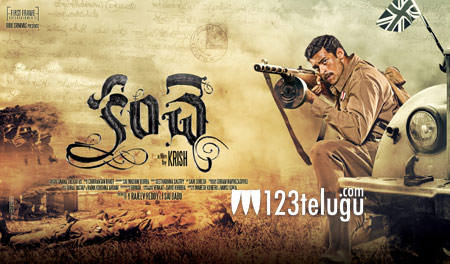 Young ‘Mega’ hero Varun Tej and popular model Pragya Jaiswal have teamed up for the period war epic, ‘Kanche’. The movie is going to hit the screens worldwide on October 22nd, as a Dusshera festival treat.

The unexpected postponement of ‘Akhil’ has prompted the team to come ahead of schedule. The film has already been censored and it has received a U/A certificate from the board. The first copy is ready.

‘Kanche’ is set against the backdrop of World War 2, with Varun Tej playing the role of an Indian solider in the British Army. The battle sequences in the movie were shot in Georgia, with real World War 2 weapons, uniforms and equipment. These scenes are expected to be a major highlight for this movie.

Bollywood music director Chirantan Bhatt has composed the tunes for this film and well known writer Sirivennela Sitarama Sastry garu has penned all the songs. Jagarlamudi Sai Babu and Rajiv Reddy are producing the film on First Frame Entertainments banner. The audio album has been released through Aditya Music.