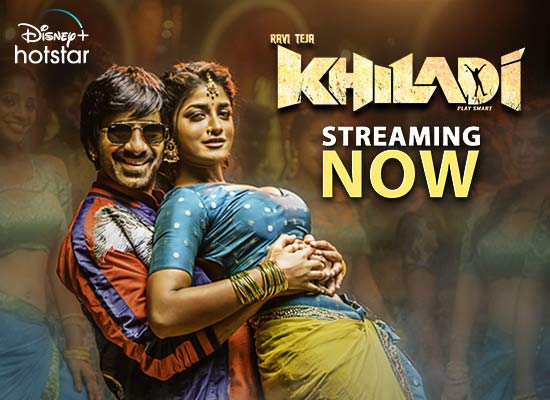 Maharaja of the Masses, the heartthrob Ravi Teja is here with yet another marvel for his audience. This action-packed family entertainer is titled “Khiladi”, a perfect name suitable for the one starring in it.

The sensational action film streaming on the OTT platform has been enthralling the audience with its slice-of-life elements. This Ravi Teja starrer depicts the nuances of a commoner’s life, the quirky and bittersweet happenings in the story of a common man’s day, making it a phenomenal film.

The actor Ravi Teja’s style is going to be even more unique than his other looks. While it is difficult to get over watching him in one role, the Mass Maharaja has come to amuse everyone in dual roles, making the entertainment double. Apart from the comedy, action, and loads of entertainment, the highlights of this film are Ravi Teja’s energy and his unique makeover for the film.

The movie also features the gorgeous actresses Meenakshi Chaudhary and Dimple Hayathi adding glamour to the screen. Covering all the masala that a film needs, Khiladi is a pure mix of entertainment that should not be missed. In a dual role, Maharaja Vibes are expected to last longer than the rest of his movies.

CLICK HERE!! to Stream Khiladi on Disney Plus Hotstar.