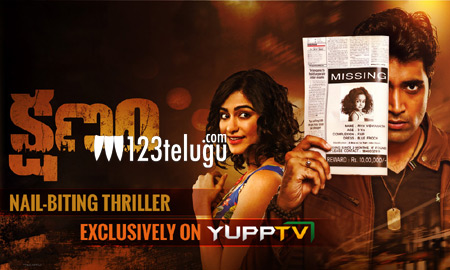 Underlining its commitment to provide high-quality and timely entertainment solutions to its expat users, YuppTV, the world’s largest Over-The-Top (OTT) provider for South Asian content, will be the exclusive partner for the digital premiere of Telugu thriller film ‘Kshanam’ Starring Adivi Sesh, Adah Sharma and Anasuya Bharadwaj, the film marks the debut of director Ravikanth Perepu.

It will be available on YuppTV from today, for its users outside India. From the dusty by lanes of Golconda to Hyderabad’s financial district, from the beaches of Vizag to the streets of San Francisco, Kshanam’s story follows the protagonist as he traverses all these places to uncover a mystery bigger than he could have ever imagined. Produced by renowned production house, PVP Cinema, with a story by Adivi Sesh, ‘Kshanam’ has stormed the box office in Andhra Pradesh, Telangana, Karnataka, Kerala, Tamil Nadu, North India and the US with rave reviews and superb collections.

Speaking on the premiere, Mr.Uday Reddy, Founder and CEO, YuppTV, said, “We have always looked to curate and present the best available entertainment options for our expat users across the world, whousually do not have much access to their preferred regional content, especially movies, due to geographical limitations. The digital launch of ‘Kshanam’ underlines our commitment to presentthe latestofferings in the realm of entertainment. We will continue to make more popular movies available to our users on our platform to keep them plugged in to the latest regional entertainment content that the country has to offer.”

Mr Prasad V. Potluri, Chairman of PVP Group shared his excitement, “YuppTV is the perfect platform for Indians based abroad who want to stay updated on the latest releases. The digital launch of ‘Kshanam’ is another step towards offering the user base the latest dose of entertainment and we are hoping for a phenomenal response internationally.”

YuppTVusers will be able to enjoy the movie through the YuppTVapp via smart TVs, smart Blu-ray players, streaming media players, gaming consoles, smartphones, tablets and PC.

About YuppTV
YuppTV is one of the world’s largest internet-based TV and On-demand service provider for South Asian content, offering more than 200+ TV channels, 5000+ Movies and 100+ TV Shows in 12 languages.

YuppTV has 25000 hours of entertainment content catalogued in its library, while nearly 2500 hours of new on-demand content is added to the YuppTV platform every day. YuppTV offers Live TV and Catch-Up TV technology. YuppTV has its presence in more than 50 countries. It has recently launched YuppFlix, a movie on demand streaming service for Expat Market and YuppTV Bazaar an online marketplace for the premium content curator.