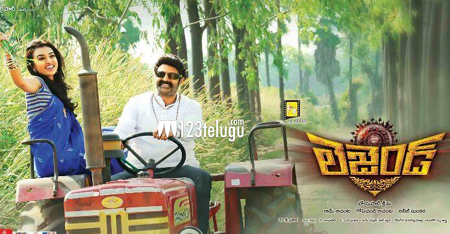 After the record breaking industry hit SIMHA, NATASIMHA Nandamuri Balakrishna teams up once again with Boyapati Srinu to repeat the magic again with Legend.

The teaser of Legend starring Nandamuri Balakrishna, Radhika Apte and Sonal Chauhan in leads, has hit the internet and is getting good response from the film goers across Andhra Pradesh. The 26-second video, which was released on YouTube on Wednesday evening, has been viewed by 120000+ people in less than 12 hours

Legend is the 1st Balakrishna movie that has been made with whooping Budget of 40 crores.
Jagapathi Babu powerful performance added another highlight to the movie
Devi Sri Prasad, first time scores music for Nandamuri Balakrishna
It shows that Devi Sri Prasad’s background and Ram Prasad’s cinematography will be among the main highlights of the film.
The whole team is leaving no stones unturned to make ‘Legend’ truly a blockbuster for 2014 .

India Kitchen ,Manchester CT thanks 14 Reels Entertainment for giving this opportunity to Screen the movie in new England area USA