Press Note: Maaya all set to storm into US Theatres with Grand Premieres on Thursday
Published on Jul 31, 2014 5:00 am IST 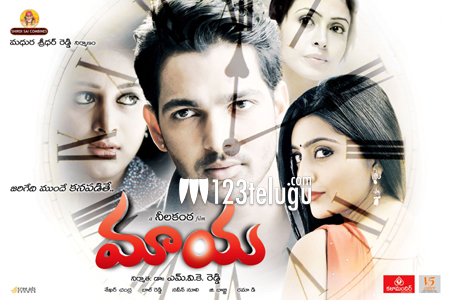 National Award-winner Neelakanta ‘s latest Maaya is all set to release in 25 locations across US with Grand premieres on Thursday, 31st Jul’14.Great positive buzz surrounded the release of Maaya, which is a simple tale, yet an extremely path -breaking film, something very different that the Telugu Audiences have seen in a long long time.The film is based on extrasensory perception.

“It’s a film on ‘clairvoyance’… the sixth sense – when people perceive an event even before it happens. It is structured as an emotional thriller and it’s Neelakanta Dream Project. The film is being made with a concept that has never come before on Telugu movie screen. Music composed by Shekhar Chandra received a tremendous response from the youth.

In yet another unprecedented move for a Telugu film, the producers organized special focus group screenings of the film, three days ahead of the Film’s release and the responses have been fabulous. The Producers also arranged for a premiere for the Film Industry, followed by Special screenings for the Media on Monday. Several film personalities and the attendees praised Neelakanta’s choice of the film.

The movie is releasing on grand scale with 25+ locations of which 15 of them have Premier shows.All movie lovers please watch for the upcoming schedule that will be released shortly.

Come be a part of the project and let people feel the love:
Business Contact:
Prasad: 9739810396
Email : plcreationsusa@gmail.com