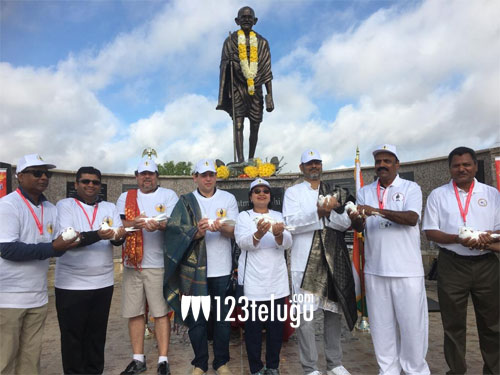 Rao Kalvala, MGMNT Secretary welcomed the gathering and said it is a quiet inspiration to see a large number of people participating in this peace walk. 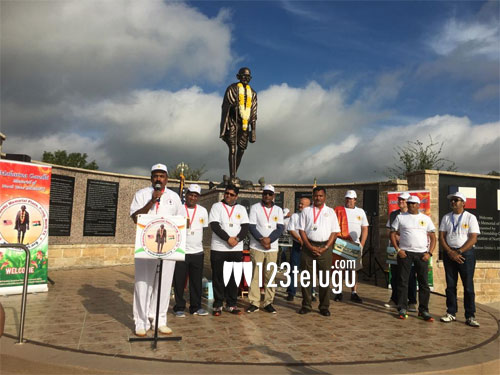 B.N, MGMNT Treasurer, introduced all Board members of IANT, IAFC, MGMNT and guests of the day. Kamal Kaushal, MGMNT Co-Chair, said Gandhi’s deeds are everlasting for generations to come and he sacrificed his life for a valuable cause that is why he is revered even today as Mahatma (Great soul).

Kuntesh Chokshi, MGMNT Board of Director, thanked the community and Irving City for their support and introduced Representative Matt Rinaldi to the audience.

Texas State Representative Matt Rinaldi in his message stated that it is heartening to see the Indian Americans coming thousands of miles away far from their homeland still celebrate events like birth anniversary of Gandhi. Both US and India have many things in common especially cherish the Democracy. He appreciated the contributions of Indian Americans for the development of the Texas State.

Irving City Councilmember Allan Meagher said it is a special honor for him to attend this great event two years in a row and pleased to see more and more contributions of Indian Americans for the economic development of the city of Irving. 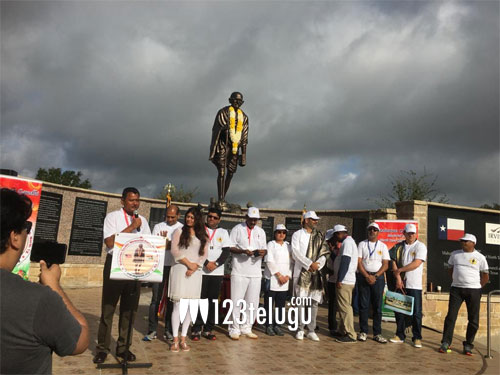 Wipro CEO Abidali Neemuchwala in his remarks congratulated Dr. Prasad Thotakura MGMNT Chairman and his team for visualizing and executing in building the largest Gandhi Memorial in North America. It is a special honor for him to stand in the shadow of Gandhiji who was a peace icon and inspired many world leaders across all continents. If everyone can adopt at least ten percent of Gandhi’s principles, the World definitely be a better place to live in. We all need to remember his famous quotation “Be the change you wish to see in the world”. He proudly stated that a significant portion of WIPRO’s earnings are being spent annually on various charitable causes.

Dr. Prasad Thotakura, MGMNT Chairman, stated that “We are all proud to celebrate 149th Birth Anniversary of Gandhiji this year and excited to celebrate 150th next year with a big fanfare. Though Gandhi spent most of his life in Indian freedom struggle, his message and philosophy made him the citizen of the world. As Indian Americans, our 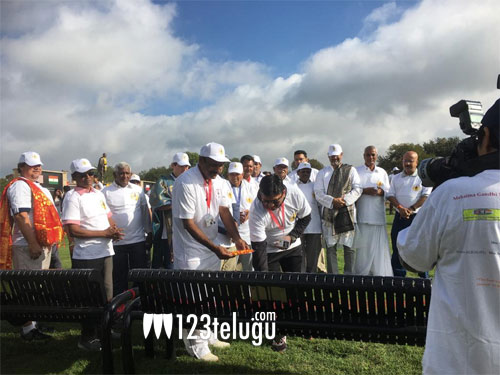 responsibility is double, we all need to rededicate ourselves for the better society in India and the stronger community in the USA. It is our civic responsibility to go out and vote to get our voice to be heard loud and clear in the mainstream. To be able to vote, one must be a citizen of the USA and must register to vote before the deadline October 9th. Do your duty to make a difference in the community.”

MGMNT Board and Guests released 10 white doves in a symbol of spreading the peace across the globe. Hundreds of people walked around the lake after a warmup session conducted by Yoga teacher Vijay. After the walk the community members paid tribute to Gandhi by offering flowers. At the end, breakfast was served to all attendees. IANT Team Raja Belani, Abhijit Railker, Jagadesh Banker, Rahul Chaterjee attended the event. B.N. thanked all Board members, Haryana Association volunteers, FunAsiA, all media, Police Department and City of Irving Officials for making the event a grand success.