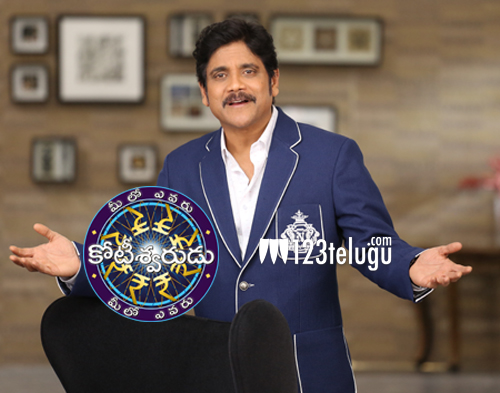 Meelo Evaru Koteeswarudu (MEK), the most sought after game show in the history of the Telugu Television screen, is all set to come back soon.

The visual treat to the viewers of the Telugu TV with the big-time film star Nagarjuna as the host has achieved phenomenal reach and success with over 4 Crore Telugu people watching the MEK game show in Season 1.

The unprecedented emotional connect and engagement brought by Nagarjuna Akkineni as the host resulted in this kind of large scale family viewing and appointment viewing for 5 days a week in the prime time. To take the MEK game show to the next level, Maa TV has decided to launch the MEK Season 2 soon with Nagarjuna as the host again.

As the first step towards the launch of MEK Season 2, the registration process to participate in the game show through Call for Entry (CFE) process would commence on 9th October at 7.00 PM and would continue for 10 days till 6.30 PM on 18th October.

The 10-day CFE process with 10 questions provide a big chance to come to the MEK hot seat and win a maximum cash prize of Rs. 1 Crore. Telugu speaking people interested in participating in the game show can register themselves during this 10 day period either through SMS or IVRS.

The details for SMS & IVRS Registrations are as follows.

To Register through SMS:

To Register Through IVRS DIAL:

1255573 for BSNL users and 5057337 for all other operators. Registrations through IVRS would cost up to Rs. 7, depending on the operator.

Detailed terms and conditions can be seen by logon to http://mek.maatv.com

Successful registrations will be put through a randomization process and followed by auditions. An elaborate selection process under the close supervision of the reputed international audit firm Ernst & Young (EY) will determine who will eventually become eligible to participate in the game show.

MEK has taken a shape with the visionary thinking of MAA TV Chairman Nimmagadda Prasad, who emphasized on making a social impact through this game show on MAA TV. The game show took the Telugu TV entertainment space to the next level with a good meaning and purpose with several heart touching life stories coming into light as a source of inspiration for common men.

Seen as a Life Changer for people, the most successful international format game show will be produced by Big Synergy.