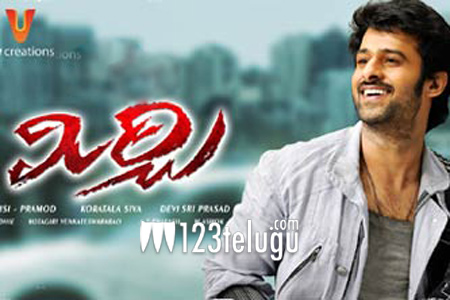 Leo entertainment , a leading distributor for telugu films in uk and europe, after the block busters like dookudu ,gabbarsing now we are back with mirchi, we are happy to announce that we have acquired the complete uk &europe theatrical rights of prabhas’s family entertainer “mirchi”. The film has south indian princess anushka & richa opposite prabhas which will be a treat for movie lovers.

Mirchi movie is blended with all flavors for a 100% pakka overseas flick for telugu movie lovers.

Music director devisriprasad after gabbarsing 2012 gave his best for michi to make it a perfect commercial entertainer in 2013.

The audio is already in the market and is super hit , released promos and trailers have got tremendous response, made us more confident and gives positive waves to be a yet another blockbuster movie.

Atmosphere is all created to give a red-carpet welcome to prabas for mirch in february first week.

Mirchi has other important characters the yester years beauty queeen nadiya a key role and hasya brahma padmasree brahmanandam and ali,
Mirchi is directed by debutant mr. Siva koratala who is known for providing the scintillating script/dialogue/screenplay for several hit flicks like’ munna,’ooservalli’,brindhavanam and bhadra.

We heartfully thank great india entertainment, sudha and sudhakar chaganti for giving us opportunity to release the film all over the uk and europe.

For screeing in uk and europe