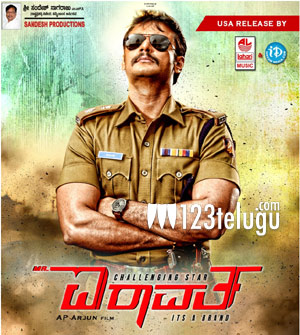 Edison, NJ 2015:2015 will go down in history as the year that has witnessed some land mark, game changing films from the Indian Movie Industry, particularly from the Regional Movie Industries of India. While Bollywood Movies like PK cast a spell on Chinese audiences for the first time, the Epic sized Baahubali broke new grounds and mesmerized Indian diaspora and held sway on foreign audiences as well. While BajrangiBhaijaantug at the heart strings of Pakistani movie goers, the Malayalam film Premam won over romantics and movie lovers alike. 2015 is also the year when Kannada Film Industry joined the Party, in North America, with the spectacular success of the edge of the seat Thriller ‘Rangi Taranga’. Popularly known as ‘Sandalwood’, Kannada boasts of a prolific movie producing Industry too, with several celebrated Movie Stars and numerous passionate fans and movie lovers, highly entertaining as well as path breaking films with universal appeal. Rangi Taranga has brought the Kannada audiences into American theaters to celebrate the Kannada Cinema like never before. And it is pretty much the sign of things to come for the Industry, that produced movie legends like Dr.Rajkumar, in International Markets.

Young and Promising Director A.P. Arjun who delivered back to back hits like Ambariand Addhuri has Directed this movie, which has already become the most awaited Kannada film of the year. The trailer generated a lot of positive buzz and has created huge expectations.

Mr. Airavata”will be hitting theaters on 1st October 2015. A record 45-theater release is planned in the USA, for a simultaneous release on the same day. This isLahari Music and iDream Media’s maiden venture in Kannada, to present the glory of Kannada Cinema tothe Kannada diaspora in International markets and movie lovers across the globe.
Jaya bharathajananiyathanujaathe,
jaya he karnatakamaathe ,BhoodheviyamakuTadhanavamaNiyeee