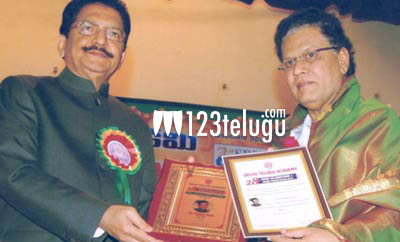 Musicologist ‘Haasam’ Raja was felicitated by the Delhi Telugu Academy in recognition of his yeoman services in the field of critiquing the Telugu music of all genres. Mangu Raja, who became popular as ‘Haasam’ Raja, has produced insightful critiques of thousands of songs. He is known to point out the roots of a song even if the root song belongs to a non-Telugu language.

For about 40 years, he has served to offer film songs as a reasearch subject. He has collected about 40,000 songs and about 1,000 film information troves.

Reacting to the recognition by the Delhi Telugu Academy, the musicologist said, “I began the research on Telugu film songs with the intention of making avaiable to all the information related to them. In this endeavour, I have been adding all the information on my site, rajamusicbank.com. Till date, I have collected information related to some 40,000 songs. My birth is my parents’. My death is my wife and children’s. I have dedicated my life to the Telugu film song. My view is that it would be great if the Government sets up a committee to institute a corporation for the purpose of the Telugu film song. I am willing to give the bank I have developed to the government. I will meet the Hon’ble Chief Minister of Telangana, K Chandrasekhar Rao garu, and the Hon’ble Chief Minister of Andhra Pradesh, N Chandrababu Naidu garu, to discuss this.”