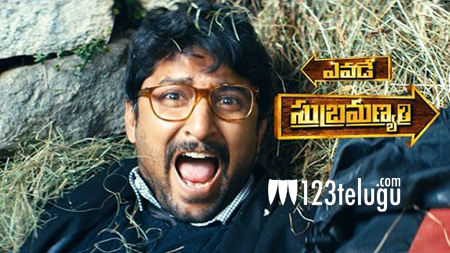 CineGalaxy, Inc. is going to distribute NANI’s upcoming Telugu comedy entertainer “YEVADE SUBRAMNYAM” in North America. Yevade Subramanyam is an upcoming 2015 Telugu comedy film by debutante film maker Nag Ashwin, starring Nani as the titular character Subramanyam, a corporate man who sets out on a journey of self-discovery. .
This film is produced by Priyanka Dutt under SWAPNA CINEMA and much of the filming took place on MOUNT EVEREST at the Everest Base Camp, becoming the FIRST TELUGU FILM to be shot at this location. The film also features newcomer Malavika Nair, Vijay Deverakonda and Ritu Varma in supporting roles.

Recently released trailer is very promising and has garnered positive response from the public & from the industry. Makers are confident about the output and confident that this movie brings fresh good feel to the viewers with beautiful locales, leading actor’s good performances & soulful music.

CineGalaxy, Inc. a well-known overseas distribution studio, which distributed many movies last year like MANAM, Power, Govindudu Andarivadele, Mukunda and Chinna Dana Neekosam is glad to associate with this project and bring this movie to the theaters nearby you in February.