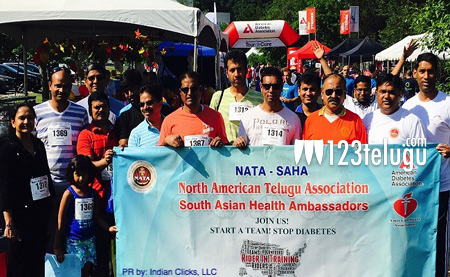 Over 1500 people participated in the event along with NATA SAHA members who came in big numbers. This was more than just another fundraising event, it’s a day packed with excitement and energy where walkers and riders of all levels joined forces in the fight to Stop Diabetes® and raised over $300,000 during this event for diabetes research education and advocacy in support of the American Diabetes Association.

SAHA (South Asian Health Ambassadors) is formed by NATA at Dallas Convention 2016 by our top leaders to promote “Health and Wellness” Programs to educate and bring awareness to all our NATA Members and South Asian population.

It is important to highlight the serious problem of Diabetes, nearly 30 million children and adults in the U.S. have diabetes and the 86 million have pre-diabetes and in South Asians specifically Asian Indians knowing Hyderabad is the Diabetes capital of the world.

We as NATA SAHA team are committed to educate and help reversing the trend by engaging our community in such events and with many other awareness programs in the coming months.

NATA formed the following SAHA committee to take these initiatives forward and spread the message:

Diabetes is a disease in which the body does not produce or properly use insulin. Insulin is a hormone that is needed to convert sugar, starches and other food into energy needed for daily life. The cause of diabetes continues to be a mystery. Both genetics and environmental factors such as obesity and lack of exercise appear to play roles in the cause of type 2 diabetes.

Results from the body’s failure to produce insulin, the hormone that “unlocks” the cells of the body, allowing glucose to enter and fuel them. It is estimated that 5-10% of Americans who are diagnosed with diabetes have type 1 diabetes.

Usually results from insulin resistance (a condition in which the body fails to properly use insulin), combined with relative insulin deficiency. Type 2 diabetes accounts for about 90-95% of all diagnosed cases of diabetes.

Diabetes often goes undiagnosed because many of its symptoms may seem harmless. Recent studies indicate that the early detection of diabetes symptoms and treatment can decrease the chance of developing the complications of diabetes.

Some diabetes symptoms include: frequent urination, excessive thirst, extreme hunger, unusual weight loss, increased fatigue, irritability and blurry vision. If you have one or more of these diabetes symptoms, see your doctor right away.

2. Leading cause of kidney failure