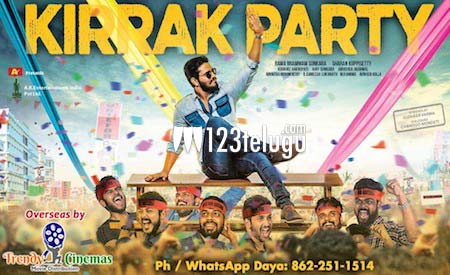 Featuring NIKHIL, who is on a roll with back to back hits “Keshava” and “Ekkadipothavu Chinnavada”, the movie also stars actresses, Samyukta Hegde and Simraan Parinja who are going to play the female leads in the film.

Directed by debutant Sharan Koppisetti and produced by Anil Sunkara under AK Entertainments banner, “KIRRAK PARTY” is all set to hit the screens on Feb 9th, with premiers in USA on Feb 8th.

An innovative pre-look Poster was released first which attracted lot of attention followed by release of the most colorful, vibrant and energetic First Look Party Poster for the film.

All the millennials digged it leading to a unprecedented craze for a movie poster ever trending at numero uno on India Trends. The Poster sure does raise the expectations over the Film.

This film will be a come-back for NIKHIL to campus genre film after “HAPPY DAYS” who has been consciously working on different genre of films. In his latest outing, he is going to portray the character of “Krishna”, an ideal Engine-err who lives life to its full extent partying every sec but also, goes through a self-discovery process which is only to be experienced on silver screen.

In writing department, three good friends & frequent collaborators of NIKHIL, Chandu Mondeti (Director of “Karthikeya”) and Sudheer Varma (Director of “Swamy Rara” and “Keshava”) are coming together for this film with one penning dialogues and other writing the screenplay of the film respectively leaving no stone unturned.

Ajaneesh Lokanth is scoring the tunes for the film which are going to be huge asset for the film. We can’t wait for the world to listen to these tunes!!

Thank you very much to Anil Sunkara gaaru for giving us this opportunity to bring this movie to overseas audience.

All you Engine-err and Graduate boys & girls, get to ready for the biggest youthful massy party of a lifetime from Feb 8th.

If you are interested to exhibit this film in your locations, feel free to reach out to us @ movies@trendycinemas.com.