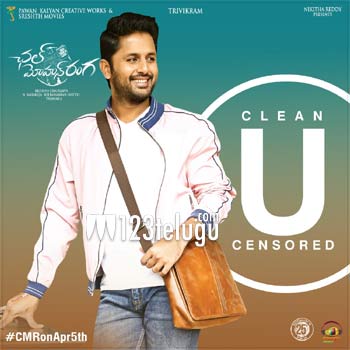 In USA it’s being releasing in 130+ locations as biggest release among Nithiin movies. All drives have been shipped and online booking started in some independent locations and rest expected to be up by today or tomorrow.
Chal Mohan Ranga is a clean “U” certificate full-length family entertainer with good dose of comedy and family emotions. It’s being presented by Pawan Kalyan’s Creative works, Trivikram and Produced by Sreshth Movies. Story being written by Tollywood’s wizard of words Trivikram Srinivas.

Recently released trailer touched 5 Million views in a week and getting huge response with more than 94% likes.
Music is being composed by SS Thaman and songs getting very good response. Background music is going to be one of the high light of the film.

Stay away from piracy and enjoy this movie with reasonable ticket prices of $12 and below.

Movie Pass and ATOM $5 off offers available in selected locations.