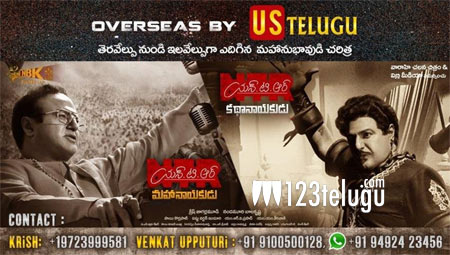 US Telugu Movie LLC (@USTelugu) is extremely happy to announce that we acquired the overseas rights of much awaited NTR Biopic (Kathanayakudu and Mahanayakudu) except India.

This biopic is based on the life story of Telugu Legend NTR who brought recognition and respect for Telugus all over the world. Nandamuri Balakrishna is portraying his father’s role which is happening for the first time that a son is acting as his father in a full length role.

NTR is being directed by Krish Jagarlamudi who delivered blockbusters like Gamyam, Krishnam Vande Jagadgurum, Kanche and Gautamiputra Satakarni which are big hits in USA as well in domestic markets. Music is composed by MM Keeravani who delivered biggest Blockbuster Baahubali.

Prominent actors of Telugu film industry portraying various roles in this biggest Biopic ever in Telugu history. KalyanRam as Nandamuri Harikrishna, Sumanth as Akkineni Nageswar Rao and Bollywood actress Vidya Balan as Basavatarakam, Rana Daggubati as Chandrababu Naidu and many actors are acting in other prominent roles. Nithya Menon as Savithri, Rakul Preeth as Sridevi, and other actresses like Tamannah, Shriya playing key roles.

The first part NTR Kathanayakudu is releasing on Jan 9th with premiers on Jan 8th which Tuesday in USA and the second part NTR Mahanayakudu will be releasing in February 2019.

Also you can reach us at @ thentrbiopic@gmail.com