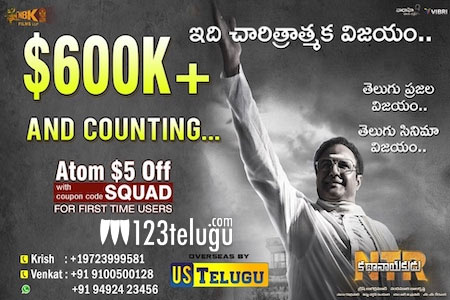 The verdict is out! The much awaited biopic of the legendary NTR Kathanayakudu released recently and ever since, there has been a great deal of positive buzz around.

Apart from critical acclaim, what’s been very encouraging is the good word of mouth that is being spread amidst the audiences who’ve seen NTR Kathanayakudu.

But that was expected because the life of a cinematic legend who is considered not just an icon but also one of the foundations of Telugu cinema’s commercial format as we know it today is an experience everyone wants!

The first part of the extravaganza directed by Krish Jagarlamudi and starring Nandamuri Balakrishna in the titular role, where he plays his father, is being spoken about as a must watch film in Telugu the cinematic world to experience a time gone by.

And we at US Telugu are happy with the response for the film and encourage audience in the US to join us in theatres to see a film that tells a story never seen before on the big screen.

US Movie lovers can still use Atom coupon code “SQUAD” to get $5 off on tickets at all atom eligible theaters. All you need is, just register with new email ID at www.atomtickets.com

We wish all movie lovers a Very Happy Sankranthi!!