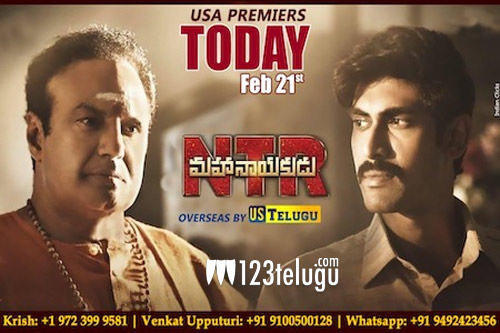 The wait is over. After witnessing the first part of the biopic on the legendary Nandamuri Taraka Rama Rao in January, Kathanaykudu, the audience will finally get to witness the finale of the film in the form of Mahanayakudu when it has its grand release worldwide on February 22nd with Premier on Feb 21st.

After getting a glimpse of NTR’s journey up the ladder in the film industry where he progressed from strength to strength, becoming a legend who’d be talked about for decades to come, the second film will show us the next part of his life where he became a political icon in the country after he decided to setup his own political party and eventually became the Chief Minister of the erstwhile united Andhra Pradesh.

Director Krish Jagarlamudi has taken extra care to ensure that the story which took off on a positive note in the first part will receive a befitting end with the new release.

Actor Balakrishna too, has left people surprised by how he transformed with extreme ease into the shoes of his father NTR who he portrays on screen.

While the first film gives us just a glimpse of Rana Daggubati’s act as Nara Chandrababu Naidu, Mahanayakudu will see him full-fledgedly.

Narrating the story of how the Nandamuri legend took the pride of Telugu people as a cause to champion and drove his point across the country, marking a new era in Indian politics, this film will bring to life an important chapter of Indian political history.

And for the audiences in the US, the leading distributor of Telugu cinema overseas, US Telugu has planned grand premieres across USA a day ahead of release on February 21.

We request you all to come join us to see the second important phase of the legend NTR’s life on the big screens closest to you!