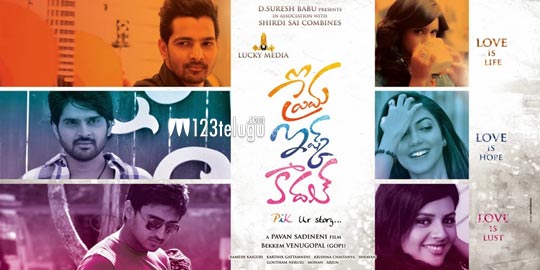 PL Creations is bringing a romantic youthful entertainer ‘PremaIshqKaadhal’ into overseas market which is presented by legendary producer D.SureshBabu , produced by BekkamVenuGopal under Lucky media banner and co-produced by MadhuraSreedhar Reddyand Dr.MVK Reddy under ShirdiSaiCombines banner. ‘PremaIshqKaadhal’ is film directed by PavanSadineni who is as NRI.Shravan gave haunting music and cinematography is being handled by KarthikGattamneni. Actors HarshavardhanRane, Vishnu and Harish, and three girlsVithika, Srimukhi and RituVarma, play three romantic pairs.
The film revolves around three love stories. The tag line says ‘PIK your story’ which indicates that the stories depicted in the movie are similar to our real life incidents. So, there is fair possibility of audience getting connected to the characters and dialogues in movie. Music composed by Shravan received a tremendous response from the youth. The crew also celebrated the success of the audio with a special event for which AnushkaShetty was the chief guest. The movie is shot in specially erected sets which would be a visual treat for the audience.
Suresh Babu is known for his track record as one of the top producer in TollywoodBekkamVenuGopal (Tata Birla Madhya lo Laila, SatyaBhama and MemVayasukuVacham) and MadhuraSreedhar(SnehaGeetham, It’s My Love Story and Backbench Student) are known for their urge to bring sensible movies with fresh talent to the audience. When these committed film producers meet talented and passionate youngsters, one can imagine the result and output of the movie.
PL Creations proudly present ‘PremaIshqKaadhal’ to the overseas audience.
Come be a part of the project and let people feel the love:
Business Contact:
Prasad: (973)_944-1120