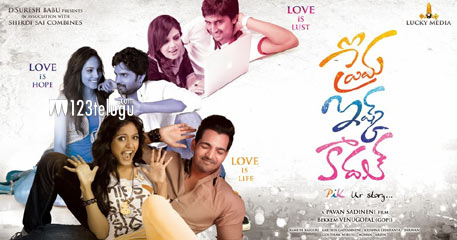 “Prema Ishq Kaadhal” starring Harshavardhan Rane, Vishnu and Harish, and three girls Vithika, Srimukhi and RituVarma, play three romantic pairs is all set to release in USA on 05th Dec 2013 with premiere shows. Shows are confirmed and the digital discs are dispatched to at all the locations. PL Creations is excited to make it a biggest release.Produced by Bekkam Venu Gopal under Lucky media banner and co-produced by Madhura Sreedhar Reddy and Dr.MVK Reddy under Shirdi Sai Combines banner.

The film revolves around three love stories. The tag line says ‘PIK your story’ which indicates that the stories depicted in the movie are similar to our real life incidents. So, there is fair possibility of audience getting connected to the characters and dialogues in movie. Music composed by Shravan received a tremendous response from the youth. The movie is shot in specially erected sets which would be a visual treat for the audience; Prema Ishq Kaadhal is a perfect Youth full entertainer for the Telugu audience.