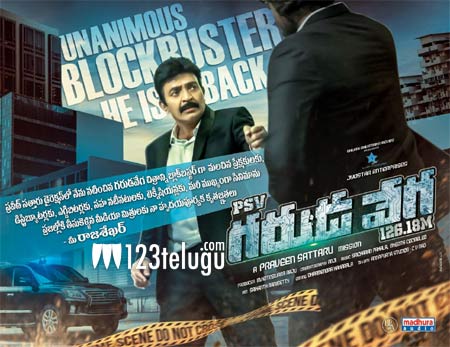 National Award winner director Praveen Sattaru new mission with yesteryears angry young man Dr. Rajashekar ‘PSV Garuda Vega 126.18M’ moviereleased in a grand manner on yesterday. The film is getting huge positive mouth talk in all its released centers. The film is rocking at Overseas box office with positive talk. Almost all shows on yesterday, Friday are filled in all its released locations across Overseas.

The critics and analysts massed given excellent reviews and ratings.The screenplay of the film hitched audiences to the seats.

Rajasekhar played a role of a counter-terrorism fighter in this film. His role was much praised by critics and reviewed as prefect come-back film for Rajashekar. Pooja Kumar of ‘Vishwaroopam’ fame played female lead role in this film. Sizzling beauty Shardha Das has played the prominent role as Journalist. Sricharan Pakala music and Bheems BGM (background music) attracted the film lovers.

Wall Poster Cinema who bought the Overseas screening rights of the film this blockbuster hit film is proud to share that the film is running well in all locations. Today, almost all shows in all locations are already filled and left with only a few tickets. Hurry up to book your ticket and enjoy this weekend by watching this spy action comedy thriller.

Don’t miss the chance to enjoy this weekend along with your family by watching this highly anticipated film “PSV Garuda Vega 126.18M” in nearby theatres….