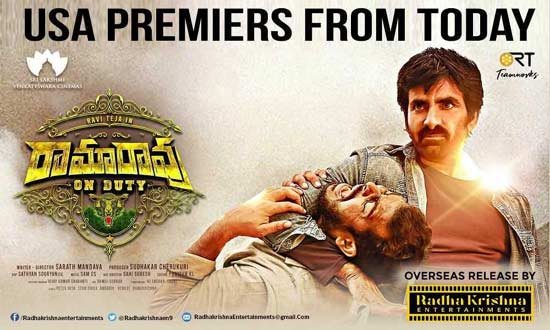 Mass Maharaja Ravi Teja’s Ramarao On Duty is releasing tomorrow across the globe. The US Premieres of the film are happening in few hours. Radhakrishna Entertainment proudly presents this mass action thriller extravaganza to the US audience at affordable prices.

Ramarao On Duty has impressed one and all with its theatrical trailer and Ramarao Mass Notice. Along with the usual mass entertainment expected from Ravi Teja’s films, this time director Sarath also added a novel element of a thriller with a curious case of missing people in a village.

Ravi Teja is posted as a Government official there. The movie is based on several reallife crime stories that happened in both the Telugu states. A gripping and interesting thriller awaits the audience in theaters and will keep them at the edge of their seats. The songs also worked big time and are trending on music charts. Action composed by five different action choreographers and background score by Sam CS will completely spellbind you.