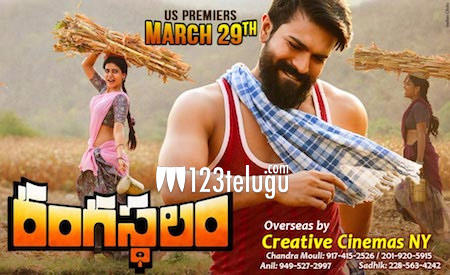 Creative Cinemas NY proudly announce Rangasthalam movie, a visual treat to USA audience. Creative Cinemas NY who have previously screened movies like Kumari 21F, Saithan, Bhethaludu and Tholi Prema is now presenting this unique project from Sukmar, an action film set in a period in past.

Sukumar has created a mark with a different approach at the subject using multi-layered screenplay, this also earned him the reputation of being an intelligent screenwriter. He is also known for differently characterizing the roles in his subjects and bringing them to life in a never seen before way in his films.

Ram Charan who has won many accolades with his transformation in Dhruva, is being presented in a never seen before look in Rangasthalam. His character and the first look poster has taken the audience by awe.

Samantha, who was known to the audience as a beauty diya is going to surprise the audience as an ordinary girl in a village back drop, she mentioned that her role in Rangasthalam has brought out a different actor in her.

Jagapathi babu, Aadhi Pinisetty and Gauthami will be seen in important roles through out the film.

Click Here!! for the Recent Released Single that was applauded by many as “Pata Yenta Sakkagunnade….”

The movie is scheduled for Grand USA Release on March 29th, 2018.