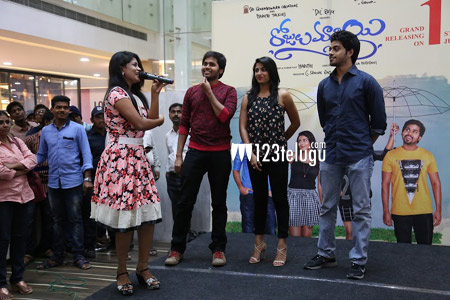 As a part of promotional activity, Rojulu Marayi team including Hero Chethan, Parvatheesam and Heroine Kruthika were in Vijayawada yesterday, Starting off with a road journey, this young team took part in Traffic awareness program. Later they headed to Trendset mall in Vijayawada where they interacted with younsters and discussed their views on the changes in lifestyle with time. Post this interactive session at the mall, the cast went on air at RED FM 93.5. On the whole, Rojulu Marayi team is at its best phase of promotion and is not leaving any stone unturned.

Starring Chethan, Parvatheesam, Tejaswi and Kruthika, Rojulu Marayi is releasing on July 1st. Story and screenplay is provided by Director Maruthi. It is produced by G. Srinivas Rao on Good Cinema Group banner in association with Dil Raju’s SVC and Maruthi’s Maruthi Talkies. Music is composed by JB and it is helmed by Murali.