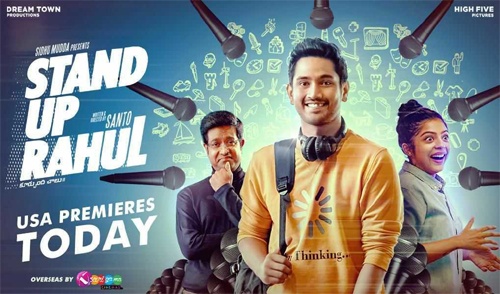 The premiere of the latest Santo Mohan Veeranki’s film “STAND UP RAHUL”, which is produced by Nandkumar Abbineni and Bharath Maguluri under production house Dream house productions and High Five Pictures will take over the cinemas in USA on 17th March 2022.

Raj Tarun and Varsha Bollamma are played the main lead roles along with Murali Krishna, Vennela Kishore and many others in supporting roles. The music is composed by Sweekar Agasti.

The movie “STAND UP RAHUL” is a romantic comedy and feel good film that has a lot of humor which could easily steal hearts of many audience, youth and families. The song “Padhaa” which has such a melodious tune is already on repeat mode for many.

Makers and Overseas Distributor, Sarigama Cinemas were confident that this romantic comedy entertainer will be memorable and steal hearts of many audience. Distributor planned this movie to screen around 120 locations, with nationwide coverage to widely reach the Telugu audience in United States.

Stay away from piracy and enjoy the movie on silver screen screens.