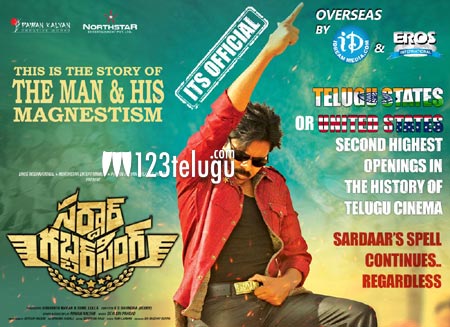 There is something very distinct about Power Star Pawan Kalyan.There have been several super stars but the way Audiences love Pawan Kalyan has been very unique. And very unconditional. Audiences who admire him do not view his films through the perceived merits of his Films. They just see him. His earnest ways of approaching his characters and the energy and intensity he brings to them have never been questioned once.

This has been witnessed many times over in the past and now yet again with Sardaar Gabbar Singh, he is out to prove that he is one of the most loved Actors this side of the Vindhyas, yet again, whose appeal though transcends the boundaries.

Pawan Kalyan – The Power of One

How does one explain the phenomenon that Pawan Kalyan has become in Telugu cinema? Last year, when Baahubali set a new benchmark at the Box-office in its first couple of days, it looked almost impossible that another film could even come close to those numbers. However, in less than a year, Pawan Kalyan’s Sardaar Gabbar Singh has not only raked in Big moolah, but also surpassed the previous records by a comfortable margin. It just shows the Appeal of Power Star.

The Undisputed King Of Box-Office

Sardaar Gabbar Singh recorded Sensational revenues with a Capital ’S’ in India, almost matching Baahubali’s revenues. ‘Sardaar’ has registered over 21.5 Crores of Distributor Share on Day 1 from the twin Telugu States, Andhra & Telangana. It crossed the Second Highest Grossing Film In Telugu by a Huge Margin.

Sardaar Gabbar Singh has, once again, proved PSPK’s stamina and craze at the box-office. Going by the box-office collections that the film raked in on its opening day, there’s little doubt that PSPK is really the undisputed KING of box-office. And there isn’t clearly a bigger star than Pawan Kalyan at the moment in Telugu cinema, who can stir such strong emotion and enthusiasm among the audience. And Reports from various corners of the Telugu States , say that the Craze remained as strong on the second day and should continue over the weekend.

In USA alone, the film collected $643,785 from its premieres, making it the second Highest opening ever in the history of Telugu cinema. And the situation is no different in other International territories like Middle East etc., In UAE, the movie has been having NON -STOP House full shows and the CRAZE is unparalleled.

Celebrating The Power Of Power Star

Right from the film’s first preview show, fans of Pawan Kalyan celebrated the film in their own unique manner. While some took out bike rallies, others danced their way to glory. Many regaled wearing the signature Red Scarves and Pawanism Tees, while others showered their love on the Tall cutouts and Flexi banners. However, everyone is reserving their best and ear-shattering response for the exact moment that Pawan Kalyan appears on screens.

The Legend Of Pawan Kalyan

Although SGS narrates the story of a Fun loving, maverick cop taking on a ruthless feudal lord on its surface, a closer look at the film reveals several social issues which Pawan Kalyan strongly feels about in his real life. And one can notice them in the subtle ways in the form of a dialogue or a scene which reflects Pawan Kalyan’s persona.

Sardaar Gabbar Singh has further reinforced the legend of Pawan Kalyan that when it comes to charming the audiences and creating a fan-frenzy, there’s very little competition for him. Power Star ’s popularity and appeal go beyond his Films.

PSPK’s presence on the Silver Screen spells magic. And For that experience audiences keep asking for more. This is a story of the Man called Pawan Kalyan and his Magnetism!!