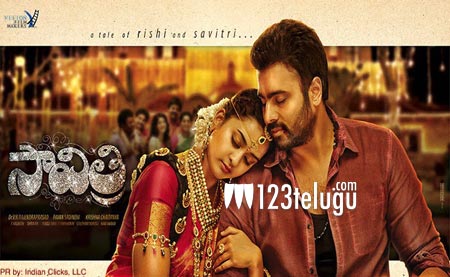 Basking in the success of the songs and the teaser, the team of Savithri, are all set for the big release on the 1st of April. A special premier is being screened on the 31st of March. Savithri, a family entertainer, is directed by Pavan Sadineni, of Prema Ishq Kadhal fame.
Starring Nara Rohit and Nanditha of Prema Kadha Chitram fame, the music is scored by Shravan and Rajendra Prasad would be producing the movie. The audiences have responded very positively to the music, and the teaser’s already go several hits on youtube.
The movie will see a worldwide release on the 1st of April, and maximum number of theatres are booked in both the Telugu speaking states, AP and Telangana, for its release here in India. The premier of the movie, which is set to happen on the 31st of March, is being sponsored by Vision Film Makers. The same firm will be releasing the movie overseas.