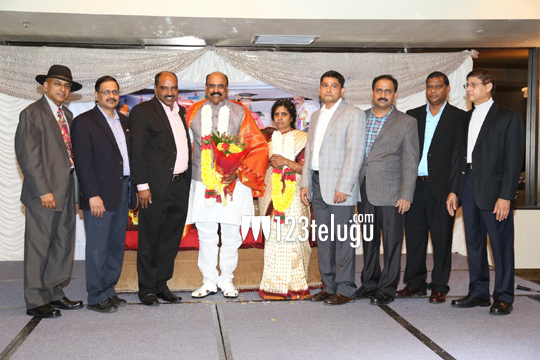 To celebrate these achievements, more than 350 people representing 20 different Indian American community organizations gathered on November 16th at Park Plaza Towers banquet hall in Dallas. With much excitement, they felicitated Dr. Prasad Thotakura for providing relentless selfless community service for more than 25 years.
Dr. Prasad Thotakura and his wife Swarupa were felicitated by more than 20 Indian American Community Organizations with number of shawls, garlands, bouquets and memorable mementos in the midst of Veda mantras chanted by Priest Subramanyam Rallabandi.

These organizations include the following:

Dr. Prasad Thotakura was conferred with many awards and recognitions for his decades of outstanding community service. Some of these include:

This banquet was hosted by friends of Prasad Thotakura including Dr. C.R. Rao, Murali Vennam, Chalapathi Rao Kondrakunta, Srikanth Polavarapu, Rao Kalvala, Vinod Uppu, Dr. Rajesh Adusumilli, Samba Dodda, and others.
Dr. Prasad Thotakura in his acceptance speech said “These are all collective efforts and one person can’t achieve it all; these honors and awards are dedicated to my parents, teachers, family members and thousands of friends who have been supporting me over the last twenty-five years with many community service oriented projects”.

Taiyab Kundawala, the Past President of India Association of North Texas (IANT) recalled many events that showcased Prasad’s unbelievable response to the call of duty when he served as President of IANT. Prasad had shown his leadership in uniting all communities, establishing cordial relations with mainstream politicians and policy makers, giving preference to youth activities, raising more than $650,000 to help Gujarat Earthquake victims, raising more than $160,000 to help New York/ Washington DC victims of September 11th terrorist attack, helping to release more than 40 Indian workers who were placed in slavery conditions in John Pickle company in Oklahoma besides handling several individual cases of accidental deaths of students and homicides over the years across the USA.

Raj Asava, the Board of Director of Indian American Friendship Council (IAFC), stated that we see more leaders as delegators but Prasad besides assigning tasks to different people, he rolls up his sleeves and works along with his team members until the task is completed which is very rare to see today. With his sincerity and transparency, he earned a lot of respect not only from the Indian American community but also from the American politicians and policy makers. He continues to encourage Indian Americans to register to vote and participate in the election process to show our united voice as a strong community.

Dr. Sandhya Reddy Gavva, the Past President of American Telugu Association (ATA) stated that when it comes to Community Service, there are no restrictions or boundaries to Prasad. He has never taken up a project that he hasn’t completed completely, with sincerity. If anything important needs to be done, he is the one person reliable to call. Most of the people see him as an Indian American community leader, but he has acquired a lot of influence in the mainstream. When she requested his help to have the Mayor of Dallas Ron Kirk attend the ATA Convention, he got it in done in hours in 2002.

Dr. Puligandla Viswanadham, one of the senior members of the Dallas community said that his family has known Prasad ever since they moved to Dallas many years ago. He had the opportunity to observe and work closely with Prasad in many social and cultural activities. He added that Prasad never loses his temper even in tense situations. He concluded by saying that this is one of the very essential qualities that a leader should have.

Dr. Alla Srinivasa Reddy, famous Cardiologist stated that “I saw him in action many times, any emergency situation in USA relating to Indian American Community most of the times, he gets the call first and he attends immediately.” Dr. Alla said that he cherishes Prasad’s long time friendship and appreciates his great leadership qualities. He admires his accessibility to everyone and his passion to serve the needy unconditionally.

Dr. Navaneetha Krishna Gorrepati, former TANA President said that he always calls Prasad for any kind of emergency help and he arrives with a solution instantly. He is very committed, goal oriented leader and most of the credit should go to his wife Swarupa and other family members for allowing him to spend this magnitude of time in community service.
Dr. Tarakumar Reddy, a senior practicing Psychiatrist and IAFC Vice President stated that he built IAFC Texas State chapter from the ground up. He is instrumental in inviting, encouraging and arranging fundraising receptions in Dallas to almost all current Indian American politicians like Swati Dandekar, Aruna Miller, Kesha Ram, Jay Goyal, Raj Goyal, Satveer Choudary, Kumar Barve, Aruna Miller, Janak Joshi, Upendra Chivukula, Prasad Srinivasan, Tulsi Gabbard, Bobby Jindal, Nikki Haley, etc. Under his leadership, the Texas Chapter of IAFC won the Best Chapter in the Country Award at a National IAFC convention held in Washington DC a few years ago.

Rao Kalvala, IAFC Board of Director and NATA Leader stated that he is fortunate to work closely with Dr. Thotakura with many community service oriented projects and always admires his talent and tenacity to get things done even when those tasks seem so complex. He further said, under his leadership we can expect lot more significant projects in Dallas very soon.
MVL Prasad, long time friend of Prasad, stated that he remembered meeting Prasad for the first time during the hectic time when he was performing the Herculean task of raising more than $650,000 from the local corporations and individuals to help out Gujarat Earthquake victims. Ever since then, he has been very impressed with his dedication and works very closely with him on many service oriented projects.

Dr. Pratap Reddy, former Registrar of Sri Venkateswara University, Tirupati, attended as a surprise guest to the banquet. He stated that it is very rare to see leaders like Prasad. He always puts community needs first and strives to help others without any expectation. His simplicity, honesty and dedication are well known in political, literary, educational, movie and arts circles in Andhra Pradesh. Usually, Universities award Honorary Doctorate degrees to eminent people in Research, Science & Technology, Educational areas and it is very rare to recognize and award Doctorate degrees in community service especially prestigious institutes like GITAM. He went on to say that this one honor speaks volumes about Prasad’s community service and character.

Murali Vennam, 19th TANA Convention Coordinator said, It was indeed my pleasure working with Dr. Prasad Thotakura shoulder to shoulder recently for the success of the convention. Just because of his able leadership, persistent fundraising efforts, constant cost cutting methods without compromising the quality but focusing on Telugu language, culture, music arranging for the first time in the history music concerts by legendry singer Padmabhushan Dr. K.J Yesudas and most popular Padutaa Teeyaga program by Dr. SP Balu to encourage our youth, saving recording breaking net revenues of close to $450,000 to TANA organization will be remembered for ever.

Chalapathi Rao Kondrakunta, 19th TANA Convention Secretary said – We used to work late nights sometimes until 2 or 3 am in the morning working on so many logistics but I never seen Dr. Thotakura fatigue on his face or losing patience and I learned a lot from his work ethics and I personally congratulate his entire family for allowing him to spend this much time in the community service.

Youth leaders Subhada Prasad and Sushmi Kosuri appreciated Dr. Thotakura’s affection and efforts to promote youth in all activities and nurture them as tomorrow’s leaders. They felt that he always gives youth a free hand to plan and execute the way they want to. He ultimately holds them responsible for their own actions.
Other community leaders Satish Manduva, Dr. Narasimha Reddy Urimindi recalled Prasad’s gentle and lovable nature, his service with a constant smile, his ability to inspire with his deeds rather than words. These qualities place him on a high pedestal in the community service arena.

Dr. C.R. Rao, in his vote of thanks message, thanked all the guests for attending from all sections of the communities, Park Plaza Tower management for providing elegant facilities, Kuchipudi Kalakshetra and Natyanjali for presenting mesmerizing dance items and Kalavaahini for presenting golden hits of yester years and current trendy songs. He thanked Subhada Prasad and Sushmi Kosuri for wonderful emceeing and number of volunteers in making the event a grand success.