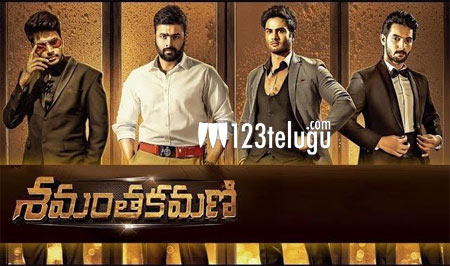 When director Sriram Adittya announced Shamantakamani, there was quite a great deal of anticipation owing to the interesting cast he brought together.

Well, after the film’s release last Friday, it seems the chemistry between Sundeep Kishan, Nara Rohit, Sudheer Babu and Aadi, has left everyone quite amazed, and the anticipations have surely been met! But what makes this film likable is that it doesn’t leave the rest of the characters astray and even Rajendra Prasad and Indraja leave you with a great impression.

In fact, this film is a lot about the characters as it is about the story. Every character is so well etched that it leaves you wanting to know more about them. But what’s the icing on the cake is that every actor owns their role to such perfection that it is quite difficult to imagine anyone else in the roles.

We often see stories of underdogs in a thriller milieu. But this film stands apart because the director has dealt with it very cleverly by adding in the perfect dose of comedy and thrill to it.

In fact, director Sriram really needs to be applauded for choosing to work on a complicated story, and making it simple and easy to understand for a cine goer.

The best thing about this film is that it gives you an escape from routine cinema and makes you excited. It’s fun, engaging and most importantly refreshing. It’s definitely worth the watch.