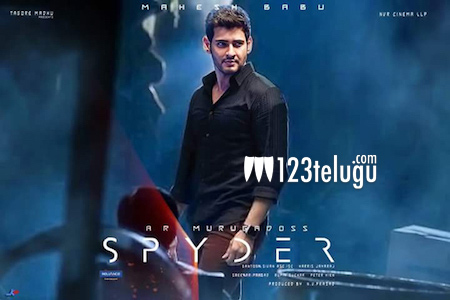 SPYder aims to deliver a visual extravaganza & pan Indian Commercial entertainer being socially relevant. Upcoming trailer will speak for itself on the world class visual effects & all set to generate buzz among all section of audience.

Mahesh is an ordinary human being with emotional intelligence skills who cracks down the organized crime in his own style. Spyder is the most expensive and stylished film in both Mahesh and AR Murugadoss career.

The goals of Spyder team is to deliver the highest quality, most entertaining, charming, engaging with a powerful message to the society, beautifully crafted in style. The new powerful trailer which is yet to release to public will not only satisfy Mahesh fans but will also create curiosity among movie lovers and will raise expectations to the sky.

Release plan in the US
ATMUS and AZ India under SSS (Satyam, Shivam and Sundaram) is planning for a GIGANTIC release in the history of Indian Cinema. The main stream theaters are overwhelmed with inquiries and have requested the distributor to open SPYder in as many locations as possible.

The final theaters list will be ready and get published by Sep 15, 2017 in all major popular sites and to begin online ticketing on the same day. The film is all SET to become the highest grosser in the US on the premier day, SEP 26th. The first show will begin from 12 noon PST.

Number of locations and screens
SPYder team is all set to open in record 400+ locations Including Premium Large format screens (RPX, ETX @ XD) from Regal , AMC & Cinemark chains. It is the 2nd highest release in the history of Indian Cinemas. Screens are booked across the country within 10-20 miles radius.

Telugu: 260+ locations in 600+ screens whereas Tamil version will get released in about 150+ locations.

TOP 10 reasons to watch SPYder
– Mahesh’s most stylish and charming films till date
– 2nd Most expensive & highest quality films ever made in South Indian Languages
– Murugadoss is known to deliver best SCREENPLAY and SOCIAL message
– Songs are already a chartbuster and the background score by Harris Jeyaraj is a BIG plus as per the inside reporters.
– Affordable ticket prices to attract repeat audience.
– TUESDAY Premier to take advantage of AT & T Buy 1, Get 1 Free, Fandango, Movie Tickets coupon and exclusive access to MoviePass members.
– 10% DISCOUNT is available for tickets purchase that exceeds 100 in one transaction. Please email to forspyder@gmail.com for more details.
– Kids and youngesters would love the Robotic Spyder, action sequences, interval bang and roller coaster ride.
– 5 Times National Award Winner Santosh Sivan’s cinematography will be TREAT to EYES.
– Lovable character of Rakul Preet and Antagonist SJ suryah will be so menacing that it reminds of Villain in Christopher Nolan movies.

A special thanks to producer Mr. Madhu Garu for his exceptional support and assistance.