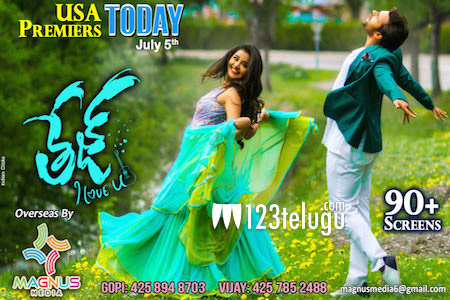 The film is slated for a release on the July 6th with premieres Today (July 5th) in USA. The unit is banking on solid Love story, humor and comedy to get the movie along in the US cordon and impress the telugu audiences.

The Impressive trailer and the refreshing posters of romantic couple have caught up well with everyone and generated a strong buzz on this film. Heartwarming audio album, picturization and production values has taken the expectations to the next level.

It is heard from inside sources that the film has turned out very well and the team is confident that it may hit the right chord and set Sai Dharam Tej for a hit start.

Wishing “Tej I Love You” cast and crew for a HIT!